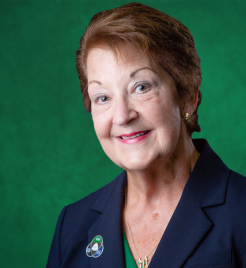 Regent Denny’s distinguished career in government was one marked with gravitas and tenacity. A retired member of the Texas House of Representatives, where she served in various capacities from 1993 – 2007, she is the owner of a small ranch and the former owner of Craver Ranch in Denton County.

Soon after she graduated, Regent Denny began her career in politics, becoming a Precinct Chairman for Denton County, a post she held for a decade. She went on to serve as Chairwoman of the Denton County Republican Party from 1983 – 1991. In 1990, she was appointed by Governor William P. Clements to the Texas Committee for the Humanities.

In 1993, Regent Denny became a member of the Texas House of Representatives. She was elected to seven terms.

Regent Denny has been the recipient of numerous prestigious awards, including the Outstanding Texas Legislator Award, Common Cause’s 1995 Star of Service Award as well as being a four-time recipient of both the Texas Ten Award from Free Enterprise PAC and of the Leader of Excellence Award from the Free Enterprise PAC, a special honor given to the top 20 percent of the most conservative legislators.

Other awards include the Texas Eagle Forum, Freedom and Family Award for the years 1999, 2001 and 2003 for her conservative voting record on social and economic issues.

Regent Denny is also a lifelong community volunteer. She is Lifetime Member of the UNT President’s Council, a member of the Denton Benefit League, United Way, Arts Council, City Federation of Women’s Clubs, Current Century Department of Ariel Club and a former board member of the YMCA and numerous other civic associations.

Regent Denny has one son, Bryan.