The UNT System Excellence & Service Awards were held on October 1 in Denton to recognize system administration team members for their service to UNT World, and to honor team members that exemplify collaboration, customer service, inclusion, innovation and leadership. 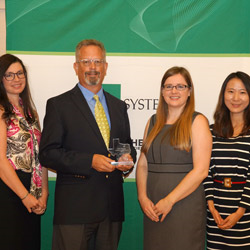 Alan Stucky (pictured with his team) received a $1000 award as the inaugural recipient of the Chancellor's Excellence Award. Alan works for the UNT System Office of General Counsel as a Senior Associate General Counsel and has served the UNT System since October 1, 2004. He also was honored for 15 years of service during the event.

"It goes without saying that Alan Stucky is a superb attorney," said Nancy Footer, Vice Chancellor and General Counsel. "What makes Alan so worthy of the  inaugural Chancellor’s Excellence Award is his ability to find creative, smart and practical solutions to help the system and campuses accomplish their critical business objectives. Measured, even-tempered and wise, Alan is the consummate counselor, colleague and mentor. He could be successful in any industry – we are fortunate he continues to make UNT World his professional home."

A full list of UNT System Administration team members that were honored can be found below.