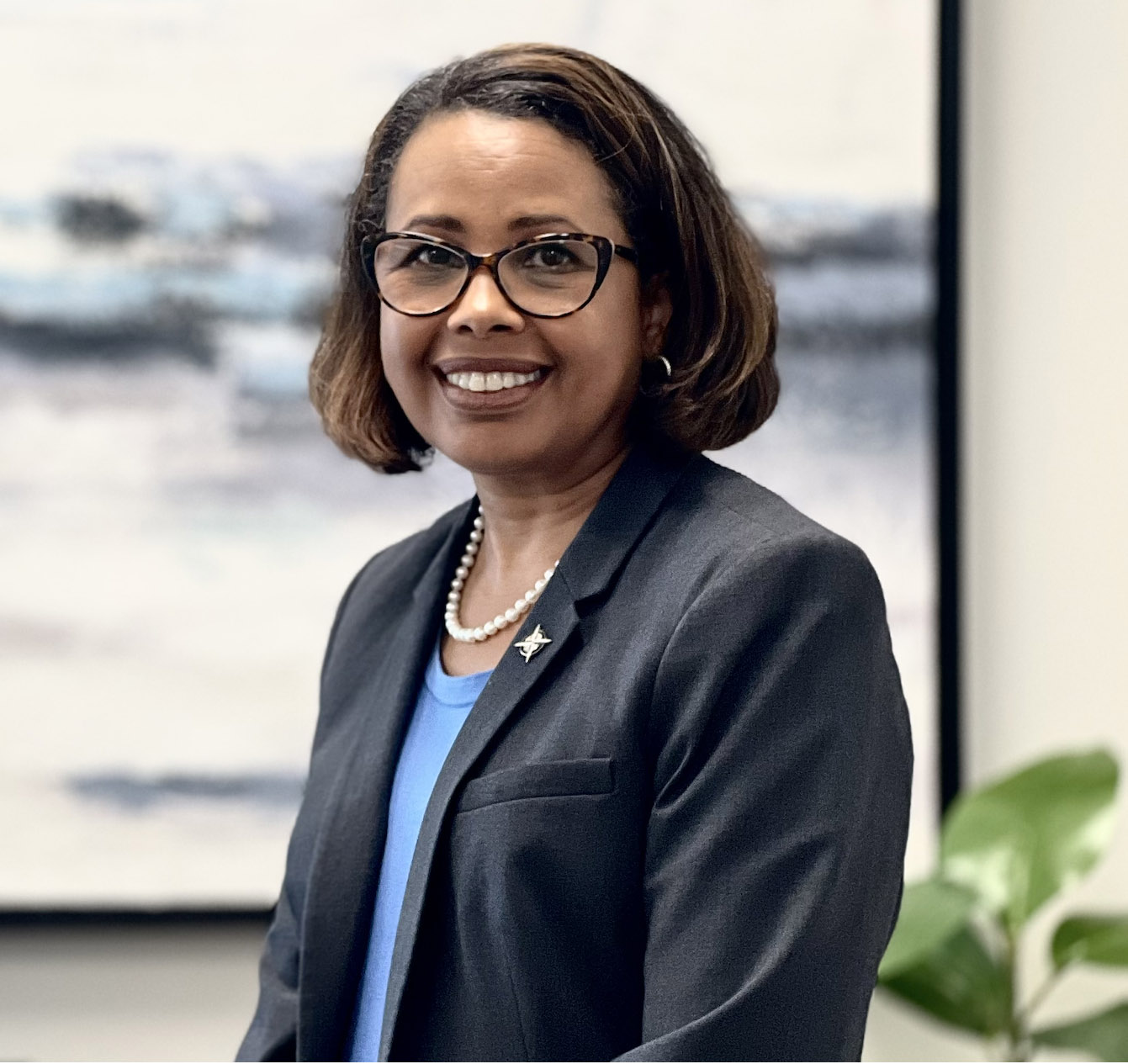 Dr. Sylvia Trent-Adams has spent her entire career blazing new trails. Before joining The University of North Texas Health Science Center at Fort Worth in 2020, she was the first Black woman to serve as Deputy Surgeon General of the U.S. Public Health Service Commissioned Corps., then the first Black woman to rise to the level of Principal Deputy Assistant Secretary for Health.

On Monday, she made history yet again when the UNT System Board of Regents named her the first Black woman to lead a health science center in Texas. The Board of Regents selected her as the sole finalist for the position on Aug. 19 based on state law that requires university governing boards to name finalists for a presidency at least 21 days before making a permanent appointment.

Dr. Trent-Adams is the seventh president of HSC, succeeding Dr. Williams, who became chancellor of the UNT System on Jan. 1 and continued to serve as HSC’s president during the search process. Prior to being elevated to president, Dr. Trent-Adams served as HSC’s executive vice president and chief strategy officer.

“From the first time I set foot on the HSC campus in January 2020, I could feel the energy and tell that there was something different about this university,” Dr. Trent-Adams said. “It’s the desire to make a difference in people’s lives, and it’s the reason I came to HSC.

“From its founding, HSC set its sights on making a difference, and more than 50 years later, the HSC community continues to change the world every day through world-class research, teaching, patient care and service. What is special about HSC is that it does this with an uncommon mix of innovation and compassion. I look forward to working with faculty, students, staff, alumni and community members to build on this inspiring legacy and shape HSC’s next great chapter of working toward the public good.”

Engaging the university’s stakeholders and community members will be among Dr. Trent-Adams’ most pressing matters. To that end, she said that one of her first steps as president will be to embark upon a listening tour to learn from HSC faculty, staff and students, in addition to community stakeholders, about what the university’s priorities should be.

Areas of interest for Dr. Trent-Adams include expanding and bringing national attention to HSC’s cutting-edge research around health disparities, Alzheimer’s disease, eye disorders, forensic identification and more. She also is interested in expanding HSC’s clinical capabilities and academic programs; broadening the university’s relationships with the community in whole health and other initiatives; and increasing fundraising and philanthropic pursuits.

The national search for a new president took eight months, and the search committee was co-chaired by Regent Dan Feehan, member of the UNT System Board of Regents and chairman of FirstCash Inc., and Brian Newby, managing partner of Cantey Hanger LLP. Both campus representatives and community members served on the Presidential Search Committee. The university also solicited feedback from HSC students, faculty and staff, and community members, whose input was crucial in guiding the committee’s development of the job criteria.

“Dr. Sylvia Trent-Adams is an extraordinarily accomplished academic health care leader,” said Dr. Michael R. Williams, chancellor of the UNT System. “We are extremely fortunate to have found someone with her unique vision, integrity and compassion to assume the leadership at HSC. Time and time again, she has demonstrated the skills and imagination needed to be an inspirational leader, confront the challenges of our time and guide HSC during this period of great opportunity.”

HSC’s president reports to the UNT System chancellor and is the CEO of the university. The president is responsible for the overall leadership and management of all campus programs, services and activities in every area of the university, including academic affairs, administration, strategic planning, student services, financial management, external relations and fundraising.

The president leads, champions and leverages the critical and unique role of the campus in advancing HSC’s academic, research and outreach mission, and in supporting the university’s reputation as a distinguished academic health science center. The president acts as a catalyst for creativity, innovation and progress.

“It is an immense honor to lead HSC, one of the nation’s most forward-thinking health science centers,” Dr. Sylvia Trent-Adams said. “I am humbled and grateful, but not daunted, by the task ahead. I am attracted by challenges and look forward to this wonderful opportunity.”

A lifetime public servant, Dr. Trent-Adams began her extensive public health career in 1992 by joining the Commissioned Corps before ultimately retiring in 2020 from the U.S. Public Health Service Commissioned Corps with the rank of Rear Admiral Upper Half. Prior to joining the U.S. Public Health Service, Dr. Trent-Adams was a nurse officer in the U.S. Army and a research nurse at the University of Maryland.

Before coming to HSC as senior vice president and chief strategy officer, Trent-Adams served as the Principal Deputy Assistant Secretary for Health from January 2019 through August 2020. She shared responsibility with the Assistant Secretary for Health planning, coordinating and directing substantive program matters; policy and program development; and determining and setting legislative and program priorities.

Trent-Adams served from 2015 to 2018 as the Deputy Surgeon General of the U.S. Public Health Service Commissioned Corps. She was a trusted advisor to the Surgeon General, providing support on a variety of critical issues, including efforts to combat the opioid crisis.

Prior to serving as Deputy Surgeon General, Trent-Adams was Deputy Associate Administrator for the HIV/AIDS Bureau, Health Resources and Services Administration. Through this role, she helped manage the $2.3 billion Ryan White HIV/AIDS program, which funds medical care, treatment, referrals and support services for uninsured and underserved people living with HIV disease, as well as training for health care professionals.

In 2017, Dr. Trent-Adams earned the International Red Cross Florence Nightingale Medal, the highest international honor bestowed upon a nurse. Among her other recognitions is a Distinguished Service Medal for her sustained leadership, dedication and service at the highest levels while serving as Principal Deputy Assistant Secretary for Health and Deputy Surgeon General. Dr. Trent-Adams also was awarded the Meritorious Service Medal for her leadership during the Commissioned Corps response to the Ebola outbreak in West Africa and the Surgeon General’s Medallion for service as acting Surgeon General from April to September 2017.

The University of North Texas Health Science Center at Fort Worth is located in the heart of the Fort Worth Cultural District. HSC trains the health care providers and public health providers of the future, while expanding the frontiers of scientific discovery. In HSC’s five schools, students learn to work in teams and to develop an innovative mindset that prepares them for a rapidly changing health landscape. HSC Health, the clinical enterprise of the Health Science Center, provides patient-centered care to people across Tarrant County.