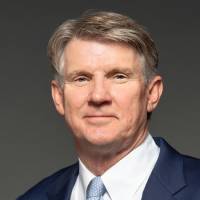 Michael R. Williams currently serves as the sixth president of the University of North Texas Health Science Center at Fort Worth (HSC) and the fifth Chancellor of the University of North Texas System (UNT System). A Fort Worth native, and first HSC alumnus to serve as President, Dr. Williams practiced anesthesiology and critical care medicine in Texas for more than twenty years.

A successful business executive and entrepreneur, Dr. Williams also holds an MBA from Duke University and a Master’s in Health Care Management from Harvard University. Dr. Williams has founded companies in several industries including health care, mortgage, and software.

Under Dr. Williams’ leadership, HSC has embraced a values-based, collaborative, and innovative team culture. During the COVID-19 pandemic, HSC stepped up for the DFW community leading efforts on health literacy, contact tracing, testing and vaccinations. Beginning his tenure as Chancellor of the UNT System in 2022, he is working to fulfill his vision for the System through creating a unified team committed to being “One” as an organization and developing stronger working ties in academics, research, and across all campuses and disciplines.

Beyond his many accomplishments, Dr. Williams’ strong business acumen has encouraged significant growth at HSC, all while never raising tuition during his tenure. Additionally, during his first year as Chancellor, Dr. Williams announced there would be no tuition increase at any campus across the UNT System for the upcoming school year.

Dr. Williams and his wife Ann have two daughters and two grandchildren.